This is awkward for me to talk about. I’m a developer, after all, and in the midst of the biggest building boom of our city’s time. So addressing some of the criticism recently lobbed at Nashville—specifically how we’re hemorrhaging character faster than developers can build crappy houses out of crappier materials—is not exactly within my realm of comfort. Except that the subject means absolutely everything to me.

When The New York Times wrote in December that “gentrification is threatening Nashville’s soul,” I agreed with them. Point by point, here is my response to Steve Haruch’s NYT piece, which was hard to hear for many in Music City, but, in my opinion, spot-on. 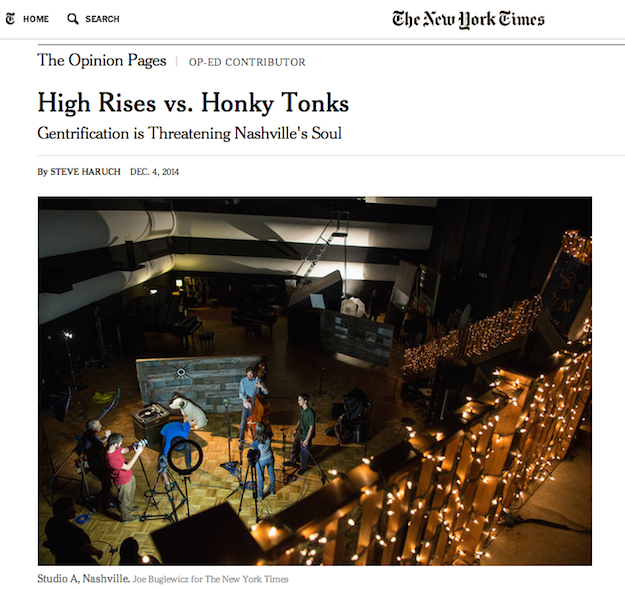 “A common refrain around here, from the mansions of Belle Meade to the working-class neighborhoods across the Cumberland River, was ‘we can’t become Atlanta,’ by which folks meant bloated and out of touch with history and Southern traditions.”

Nashville is rapidly losing its identity, falling into step with the homogenization of America. Some days it seems that everybody is in a mad rush to destroy our city as fast as they can because they don’t know when our day in the sun will end. It’s all, ‘How fast can I do this?’ And ‘How much can I sell it for?’ This is what started to happened before the recession, and now everybody and their brother have jumped back on the bandwagon, thinking they can flip a house because they watched it on HGTV. Now everyone’s doing it again. It’s driving up costs, and it’s driving up demand for lots, and it’s completely confusing the architecture of the neighborhoods. We’ve got so many different thought processes side by side; on one street you might have 10 different thoughts—and maybe only one or two of them are even good. It’s disruptive. For as many new homes as we’re putting up, I don’t see a new style of architecture evolving. I just see greed on everyone’s behalf.

Neighborhoods are being scraped, and we’re replacing them with new houses made of new and questionable materials. A lot of these materials and technologies that are being developed—we don’t know what they’re going to look like a few years down the road. Remember in the ’80s, there was a trend to use Dryvit—an “outsulation” finish that looks like stucco? Suddenly Mediterranean houses all over town popped up clad in this new-fangled material. But then everyone discovered that because Dryvit is essentially made of something like Styrofoam, it looks great only temporarily—until a golf ball hits it or a weedeater knocks into it. It dents, and you can never fix it. And it has something in it that bugs love, but no one knew that when Dryvit became a thing. The same thing could very well be happening in Nashville now. We don’t know how these houses are going to look in 70 or 80 years. We know what the stuff looked like that they got rid of. And that was our identity. I would be scared to death to live on the third floor of one of these new tall and skinny houses in a high wind or during a tornado. I wouldn’t be in the house. I’d be out driving, trying to outrun it.

I’m spending a lot of time in this post talking about how things look, but I don’t want to miss the point that as we’re building all of these new houses, we’re inevitably pushing out people who are older or who are low income and can’t afford rising property taxes—people who may have things to contribute to the greater good. These people are part of what made Nashville a unique place to live in the first place. Now they are having to go somewhere else to live, and now we are not unique. Sometimes Nashville looks and feels just like everywhere else. It’s frustrating to go to Atlanta and see how old neighborhoods—and neighbors—are being wiped out. I think it’s kind of a tragedy. In Atlanta and Nashville, we’re losing some of our spirit in the process.

“For many of these new gentrifiers, the old Craftsman homes are just too small, so developers have been buying up these small houses, then demolishing and replacing them with much larger ones. In many cases, the lots are stuffed from property line to property line with a new species of local housing: ‘two-on-ones,’ also known as ‘tall-and-skinnies’—ugly conjoined properties that look like a duplex that’s been sliced in half and partly reattached at the rear.”

So many of the new tall, narrow houses being built in Nashville look as terrible as they do because they’re built too high off the ground. This is a huge pet peeve of mine, as I think it’s important to keep houses in proportion with their surroundings. In the old days, houses were made to be close to the ground. Now we have codes that prevent you from doing that because stacking them up higher prevents termites, as the wood’s not in contact with the ground. Developers often have very small footprints to build on and they want to fulfill the hunger for significant square footage, so they have no place to go but up because they’re just trying to create space. Unfortunately, square footage has been driving the cost of houses forever. When banks appraise houses they primarily do it based on square footage, so everybody, in their greed, just wants to build the biggest thing they can.

It doesn’t have to be this way, though—even if a lot is tiny. For instance, anytime Bynum Design has built a home on a hill, we try to scale that down and somehow have our plans follow the landscape—adding steps inside the house—so that it’s not, say, short at the back and a bazillion blocks high in the front. I also think that rather than paying $400,000 for a tiny lot or rather than tearing down a worthwhile house that seems too small at first glance, developers really would do ourselves a far greater service in the long run if we bought up some of the old houses and remodeled them or updated them with roomy additions. Otherwise, it will become true that you can’t have a unique experience in Nashville anymore. As a designer, that’s really disappointing to me; I want us to think bigger than we are so we don’t regret what we’ve become once the spotlight drifts away from us to fall on some other new “it” city. 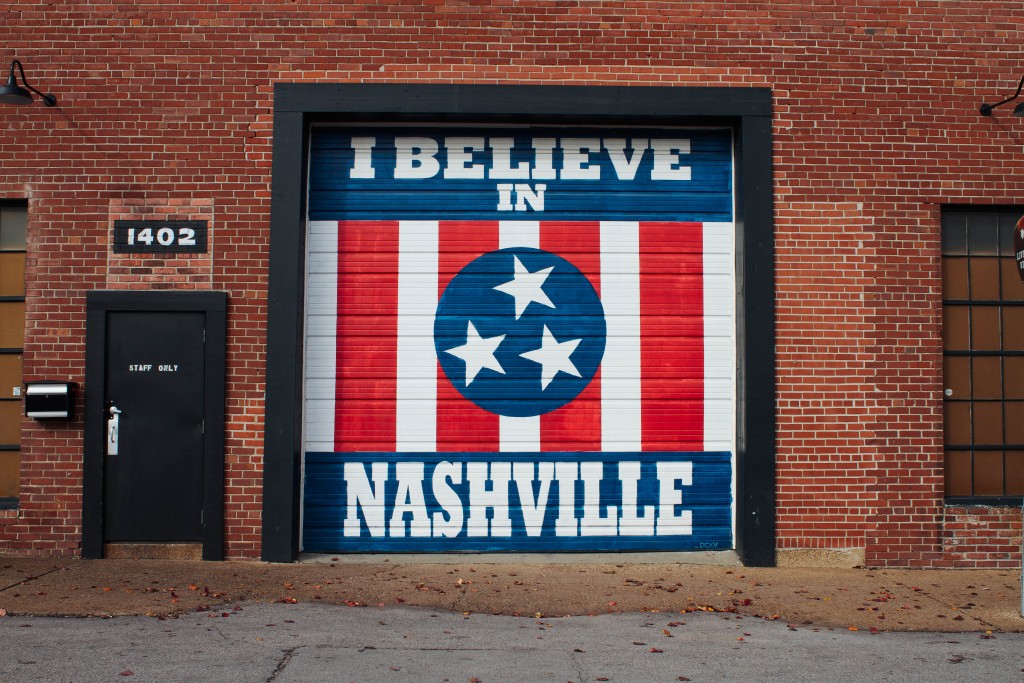 “The enormous new homes are often clad in the trappings of the humbler bungalows they replaced: clapboard siding, knee braces at the gables, exposed beam-ends. The results can be grotesque, as if the skin of a small house has been stretched over a much larger one.”

You can see really obvious examples of what Steve Haruch is talking about if you drive around. Since new houses are going up next door to old ones, plenty of builders are halfheartedly nodding to the prevailing architecture with these kind of “grotesque” details. But they’re not thinking through what they’re doing, and they’re not doing it right. They’re just making the houses bigger and then slapping on a few details that are made up, that don’t belong. At Bynum Design, we aim every single day to massage these kinds of historical details into our designs. We don’t just apply them like they’re buttons or pockets—an afterthought once we’ve achieved some sky-high square footage number. We really work it from a design standpoint, and I think—I hope—that’s the difference.

Maybe it’s easy for me to talk, since I’m one of the lucky ones. Because we can build and design our houses, we don’t have to pay a builder fee or a design fee, so we can spend more money on the quality of our homes and still sell them for the same and make the same amount of money but make them better. I still maintain, though, that all Nashville developers have a huge opportunity—even a responsibility—to build better houses in this city they call home. They can use better materials. They can pay more for labor. They can take more time with a project. It may increase the cost, but it’s worth it. I want to still be doing this 10 years from now, when the economy isn’t as swell and the houses I’ve built here can really stand as a testament to my craftsmanship and to the ability of Nashville to weather growth beautifully.

I remember Nashville’s last big building boom—maybe it was in the late ’80s or early ’90s—and there were cranes as far as the eye could see. It was an exciting time. It is now, too, but I’m jaded now. I’m older, and sometimes I find myself driving down a street I used to love and feeling depressed about the way it’s changed. But other times all this “progress” really does leave me pleasantly surprised. The other day I drove up to Division Street from down around Broadway; it was a gorgeous day, and I got up to where they just tore down that fabulous old house on the right, and the new view that unfolded in front of me was unbelievable. I was like, “Where am I?” You could see the Pinnacle Building in the distance and all the new apartments along Demonbreun, and it was magical. It felt like home.

3 thoughts on “Nashville’s Gentrification: A Response to The New York Times”