Technically, this is the story of two homes. Two very important homes, in that they signified the beginning of Bynum Residential Design and introduced the tone and template for so many of our future designs throughout Nashville. 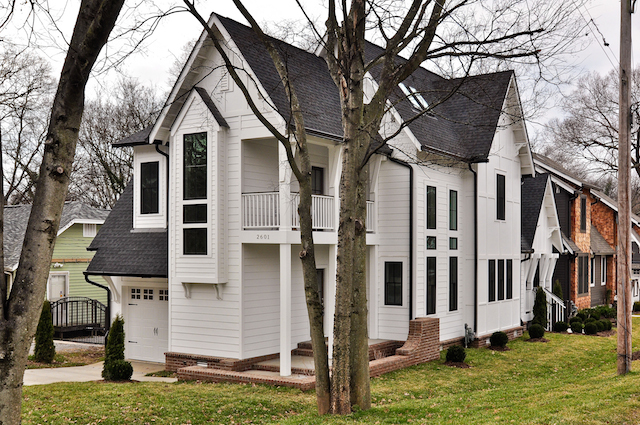 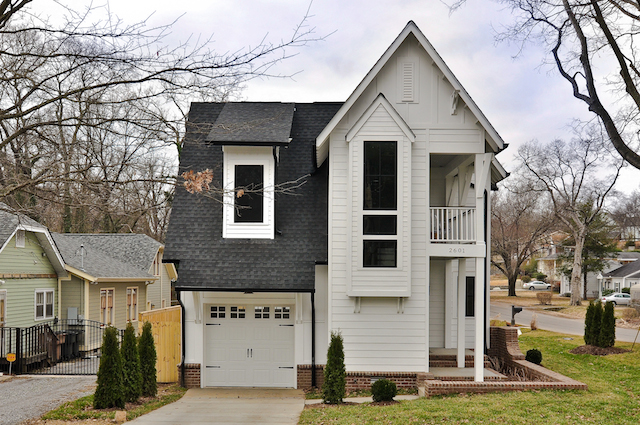 *All photos shown are of “Gretel” only.

The Process: When we acquired a dilapidated house not fit for human habitation on a parcel of land in 12South, we did so with great excitement and not a little trepidation; this was to be our first official project as “Bynum Residential Design,” would be executed according to our specifications, and would be financed by—you guessed it—us. It was 2010. To maximize the space most efficiently, we drew up plans for two tall and narrow houses, side by side, to be joined by an inconspicuous connector (per Nashville code) but with two distinctly different facades and feels. Hence, the Hansel and Gretel name, which was given to these homes by my friend Bo Boaz, a Franklin designer who proclaimed the houses “Hansel and Gretel” as soon as he laid eyes on them. 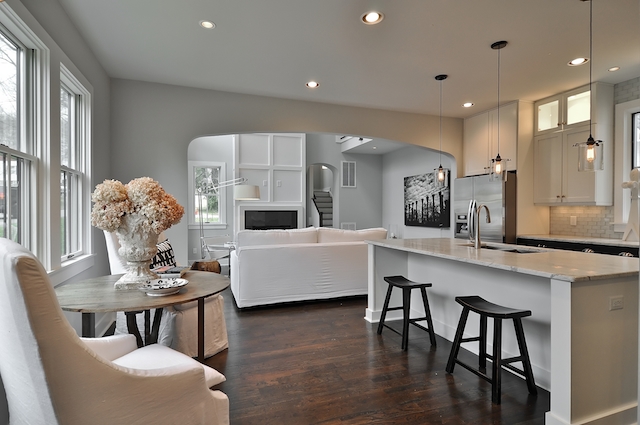 Meant to be? This corner in 12South—situated at the intersection of Vaulx Lane and Montrose Avenue—is a block from my own house. Every day for 15 years I drove by this crummy old house and thought, “If that house ever sells, I’m buying it.” And I drove down the hill one day, and there was a realtor putting a sign in the yard. I called him, and I was just sitting there and he answered his phone, and I said, “I see you putting the sign in the yard, and I want this house.” 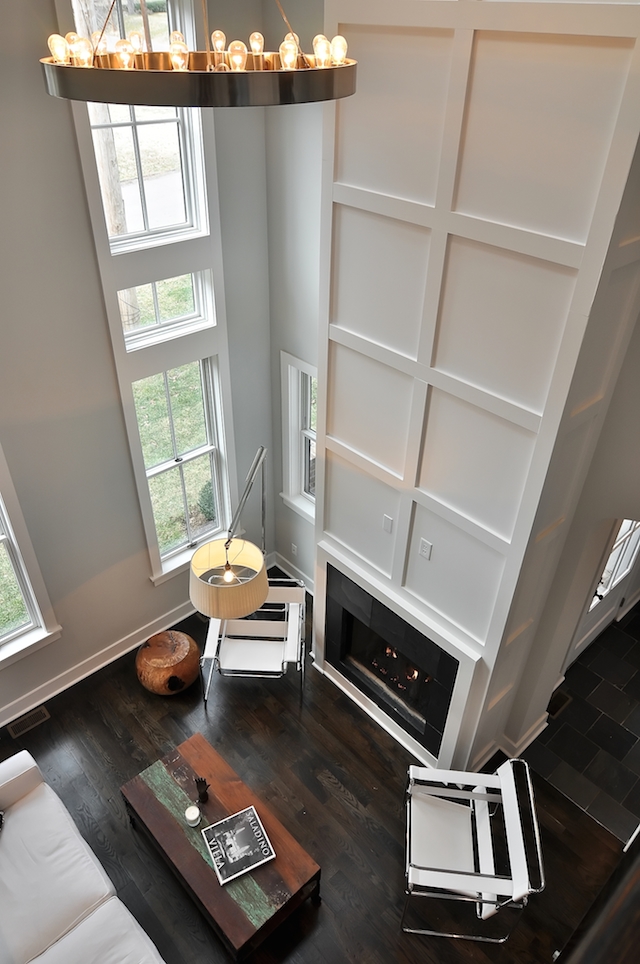 Differentiating Hansel and Gretel. When we do multiple houses on a lot I don’t want the houses to feel the same, like an apartment complex. If you become friends with your neighbor I want you to be able to go to their house and have a unique experience—not know where all their hidey-holes are, you know? We carefully planned ways to distinguish Hansel and Gretel from one another. The white one is very farmhousey—very clean and bright. They both have an open floorplan, but the back house with the shake on it had a darker, manlier vibe about it. The exterior was dark, the interior was dark, it had a bridge that went overhead. Everything I did was really intentional—even the landscape. The white house had a Beetlejuice sort of landscape; all we used were columnar arborvitae and round boxwoods. The back one—Hansel—has more of a suburban looking landscape, with beds hugging the house. They’re just completely different in every way. 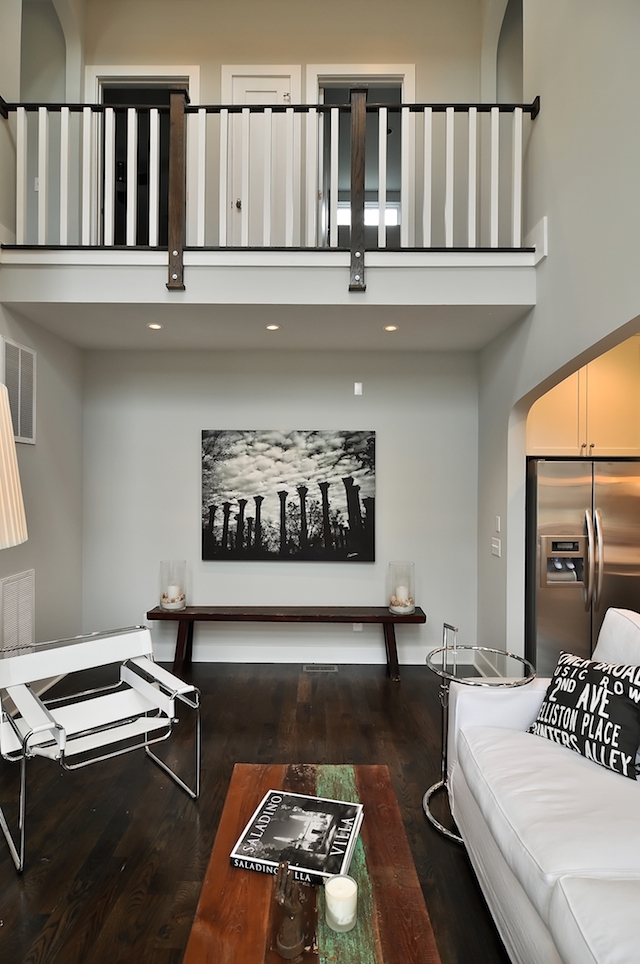 Getting our first farmhouse fix. Building Gretel in particular made me realize just how much I love the farmhouse style. I had never had a client who would let me do that in the past so when I sat down with a blank piece of paper that’s just what happened, and it was so magical. This farmhouse has now inspired several others that I’ve built for clients who asked me to replicate it. 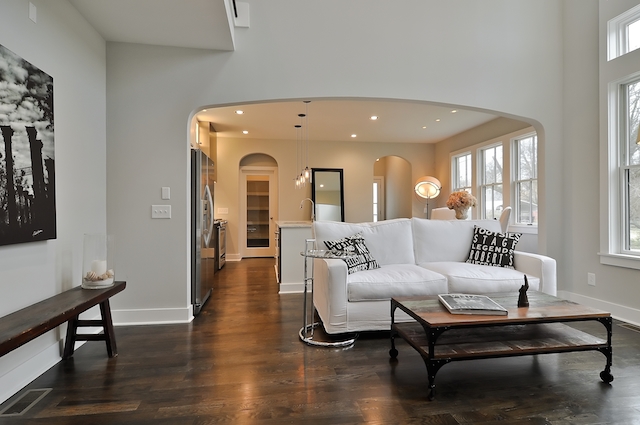 Working up the nerve. Probably the biggest challenge faced with these homes, being the first we’d done on our own, was the one we waged against our own confidence—just in having faith in our vision. In the end it taught us a huge and important lesson, which is that Bynum Residential Design really does have what it takes to build exactly the home we imagined in our minds and on our computer screens.

Getting above the (very recently flooded) floodplain. Right after we tore down the house on this lot, it flooded. It was the Nashville Flood of 2010, and everything as far as the eye could see was drenched. Houses nearby had water up to their windows. Needless to say, we quickly realized we would need to elevate the houses we built considerably. This proved problematic for a couple of reasons—first, I was trying to keep these houses in scale with the neighborhood, and I didn’t want them to be gigantically tall. We had to immediately do some site work and start laying block. For the record, my biggest pet peeve is when a builder doesn’t excavate a crawlspace and just starts laying block. I didn’t want to do that here. We did build our houses far above the ground, though, which made us have to come back with a lot of extra soil at the end and grade everything up to the house. Throughout the build, I was so overwhelmed with this height thing that I was doing everything I could—even though it was a two-story house with a steep roof pitch—to keep it low, so that was a huge obstacle in my mind. Now if you drive by there and look at these houses, they feel completely normal—the right distance off the ground. They just feel smart and right.

Uneasy neighbors. Some people in the neighborhood were kind of opposed to what we were doing because we were changing the architecture there. I had to stay true to my vision anyway, even though I definitely had a fear of the unknown—will people like this? Will somebody buy this? Believe it or not, people weren’t yet busting down the doors to move into 12South. There had been some other development on Vaulx Lane but nothing like what’s going on over there now. Not long after, we built four houses across the street from these; that opportunity came about because of this, too. 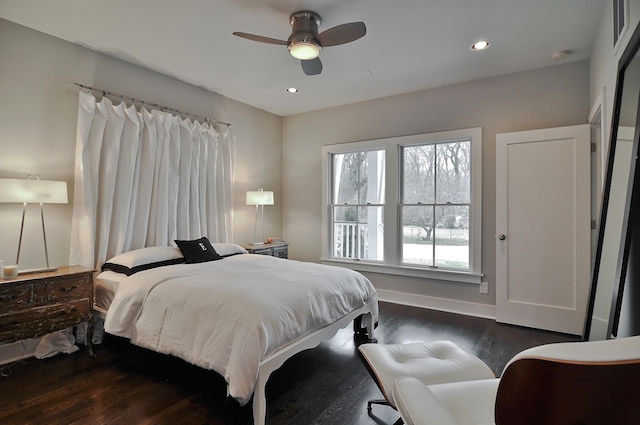 The Happily Ever After: Thinking back about these houses, I’m still blown away by how intimidated I was and by how pretty they turned out and how well they were received. When it came to getting started on this property, I ran into a mental block. I wanted the lot and I wanted to develop it, but I was afraid to bare my soul with these houses. In the end, we had people fighting over who was going to buy them. There were back-to-back showings, and both sold in a heartbeat. The guy who bought Gretel, the white farmhouse, says people still stop and ask him about it. And we’ve gotten numerous leads from people asking us to recreate Gretel for them. I’m so grateful that we were finally able to just get really nervy and do these houses exactly the way we wanted to. They were a huge hit.